Minister Nanayakkara is on an official visit to UAE and explained to the UAE minister about difficulties faced by Sri Lankans who come in search of jobs to UAE on visit Visas as a result of various scams by individuals and organized groups. He also explained that efforts are taken to make the public aware of the perils of seeking foreign employment opportunities through a visit visa.
The UAE minister responded positively to a request by minister Nanayakkara to provide more job opportunities in UAE for skilled workers from Sri Lanka.

Minister Nanayakkara explained that 35,572 Sri Lankan workers obtained employment opportunities through the Sri Lanka Bureau of Foreign Employment last year which accounts for 11.4% of the total departures in Sri Lanka. This is a 27 percent increase in 2022 compared to 2021.

The UAE Human Resources Minister explained that the newly implemented mandatory unemployment insurance applies to migrant workers as well. This will provide an amount equal to 60 percent of the salary of a migrant worker for three months in the event of job loss. He also told Minister Nanayakkara that a center that operates in 20 languages has been set up by UAE to address migrant worker grievances. Labor recruitment fees were also discussed. 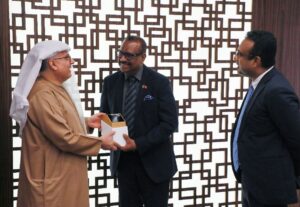