Home/News, Press Releases, Recent News/President Gotabaya Rajapaksa highlights the importance of global action to curb deforestation and use of fossil fuels at the 5th Indian Ocean
Previous Next

President Gotabaya Rajapaksa undertook an official visit to the United Arab Emirates from 3
to 5 December 2021 to attend the 5th Indian Ocean Conference – IOC 2021 in Abu Dhabi.
President Rajapaksa delivered the Inaugural Address as the Chair of the IOC -2021 at the
opening ceremony on 4 December in Abu Dhabi. Addressing the conference, held under the
theme, “Ecology, Economy, Epidemic”, the President highlighted the importance of taking
global action for limiting deforestation, curbing use of fossil fuels, preventing over-exploitation
of finite resources and increasing the use of renewable energy for a secure world tomorrow. He
underscored the urgent need for cooperation between nations to meet the challenges of the
current global pandemic. 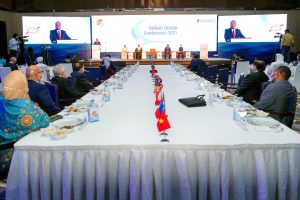 Vice President and Prime Minister of the U.A.E and the Ruler of Dubai Sheikh Mohammed
bin Rashid Al Maktoum met President Rajapaksa at the Sri Lanka Pavilion at Expo 2020 in
Dubai on 4 December. At the outset, President Gotabaya Rajapaksa congratulated Vice
President Sheikh Mohammed on the 50th anniversary of the UAE’s National Day which was
celebrated on 02 December 2021. During the discussion, Vice President Sheikh Mohammed
recalled the longstanding friendly relations between Sri Lanka and the U.A.E., spanning over
several decades and emphasized the need for further enhancement of bilateral relations through
the exchange of high-level visits. Highlighting the importance of expanding economic
cooperation, President Gotabaya Rajapaksa invited businesses and companies in the UAE to
invest in Sri Lanka, especially in the Colombo Port City Project. 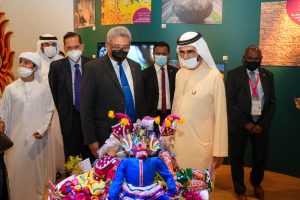 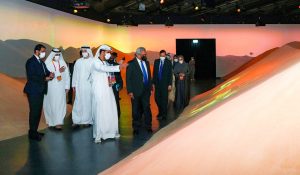 Due to his hectic schedule, President Gotabaya Rajapaksa paid a virtual courtesy call on Crown
Prince of Abu Dhabi and Deputy Supreme Commander of the Armed Forces Sheikh
Mohammed Bin Zayed Bin Sultan Al Nahyan. During the virtual meeting, the Crown Prince
of Abu Dhabi welcomed the President to the UAE and expressed his keenness of having a
meeting in person in future. In response, President Rajapaksa congratulated the Crown Prince
on the Golden Jubilee of the foundation of UAE. The President expressed his gratitude to the
Crown Prince for the warm hospitality afforded to him during the visit and extended his sincere
thanks to the UAE for playing host as the second home for nearly 300,000 Sri Lankan
expatriates by providing job opportunities. 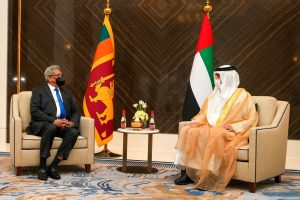 At the departure of President Rajapaksa at the Dubai International Airport on 5 December,
Minister of International Trade Dr. Thani Al Zeoudi reiterated the importance of strengthening
bilateral ties and assured the President of his support toincrease trade and investments from
the UAE.

Foreign Minister Prof. G.L. Peiris who accompanied the President on this visit and Ambassador
of Sri Lanka to the U.A.E. Malraj Silva participated in the official engagements of the
President.