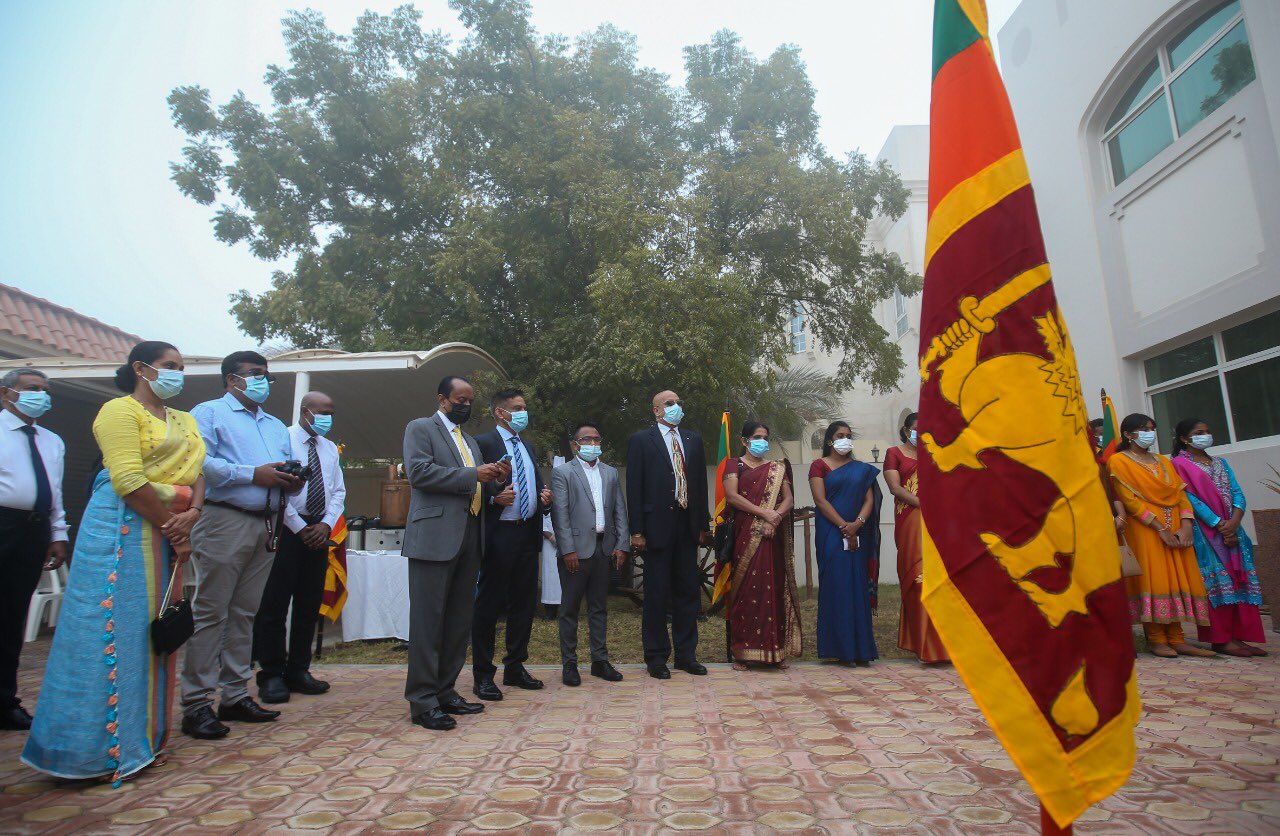 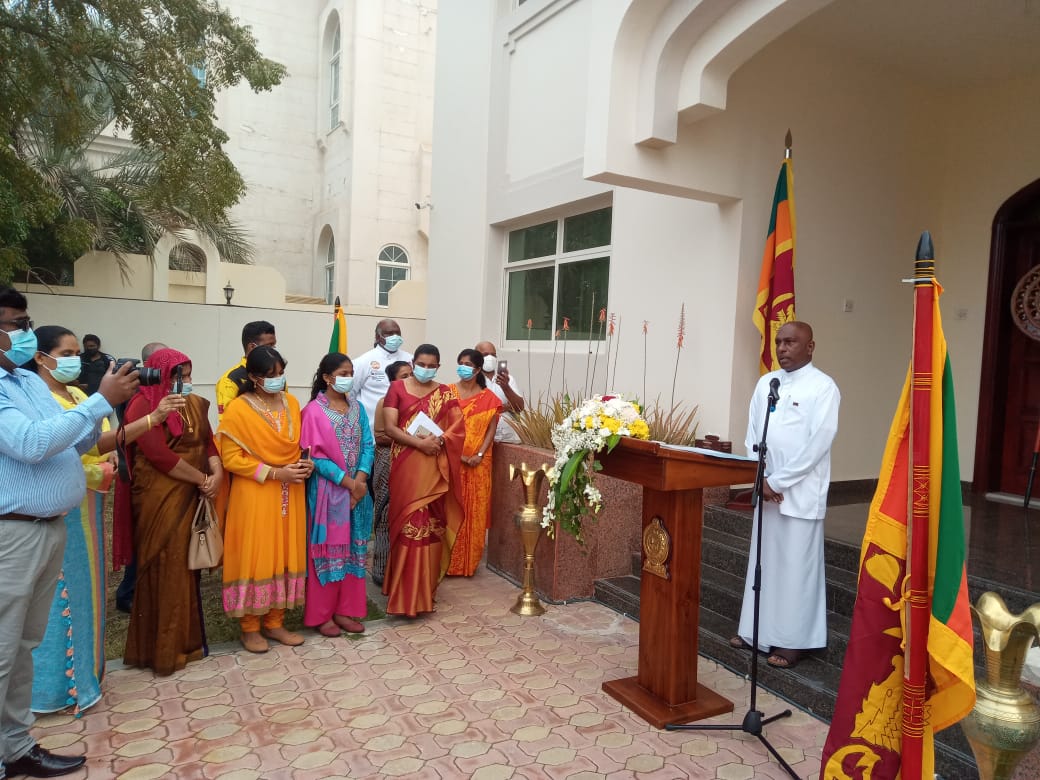 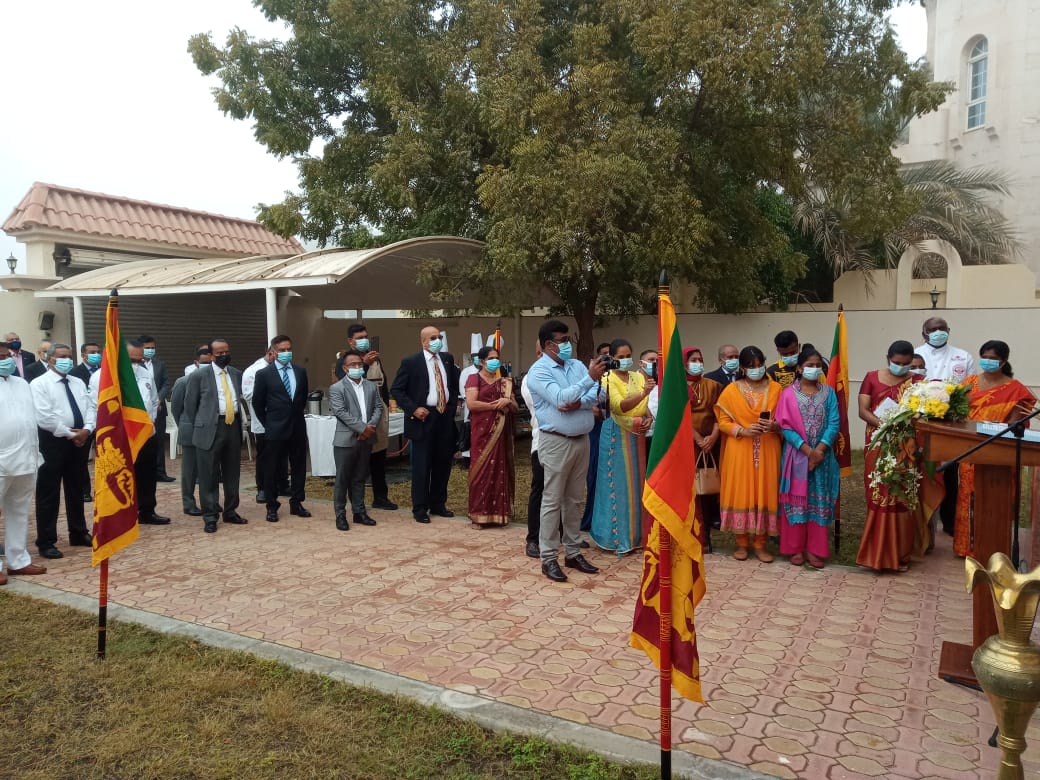 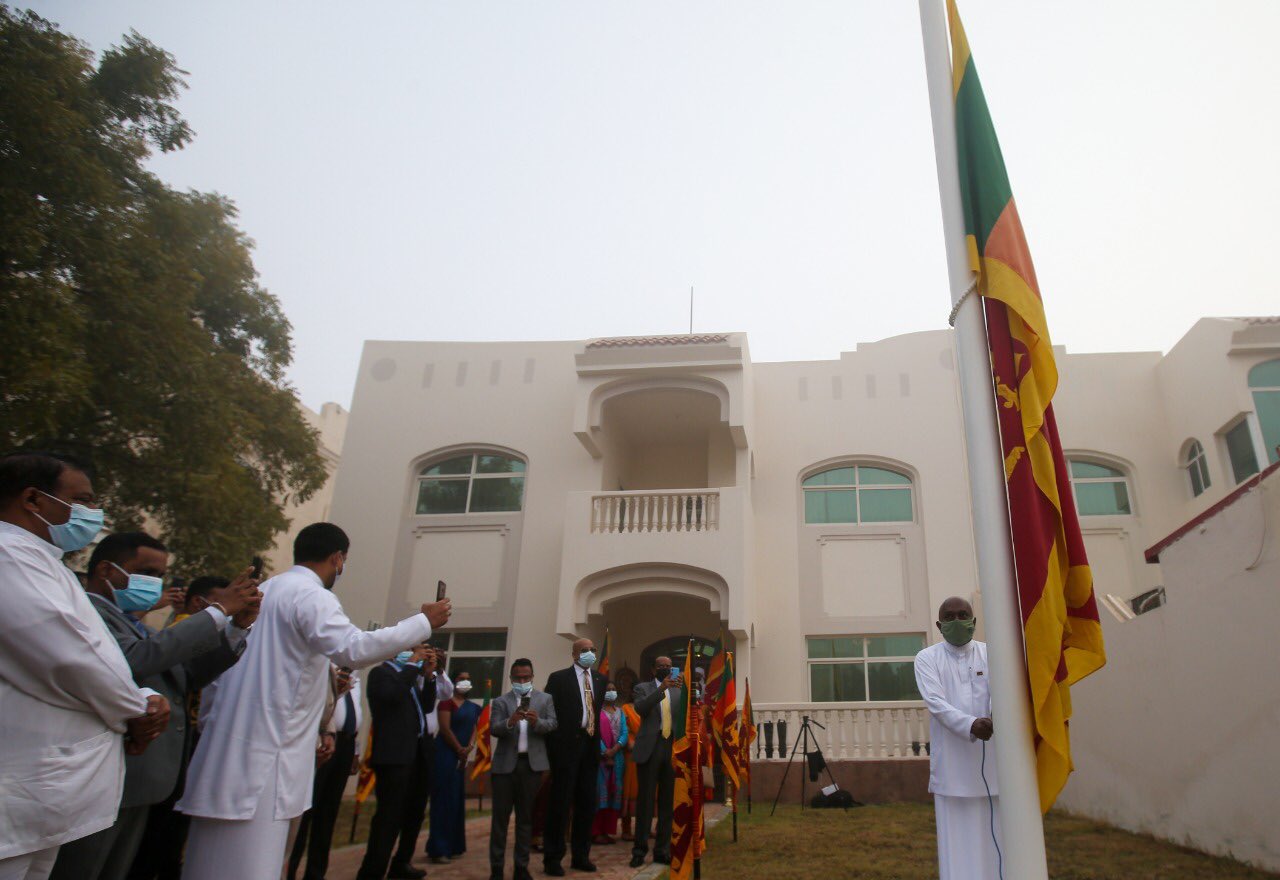 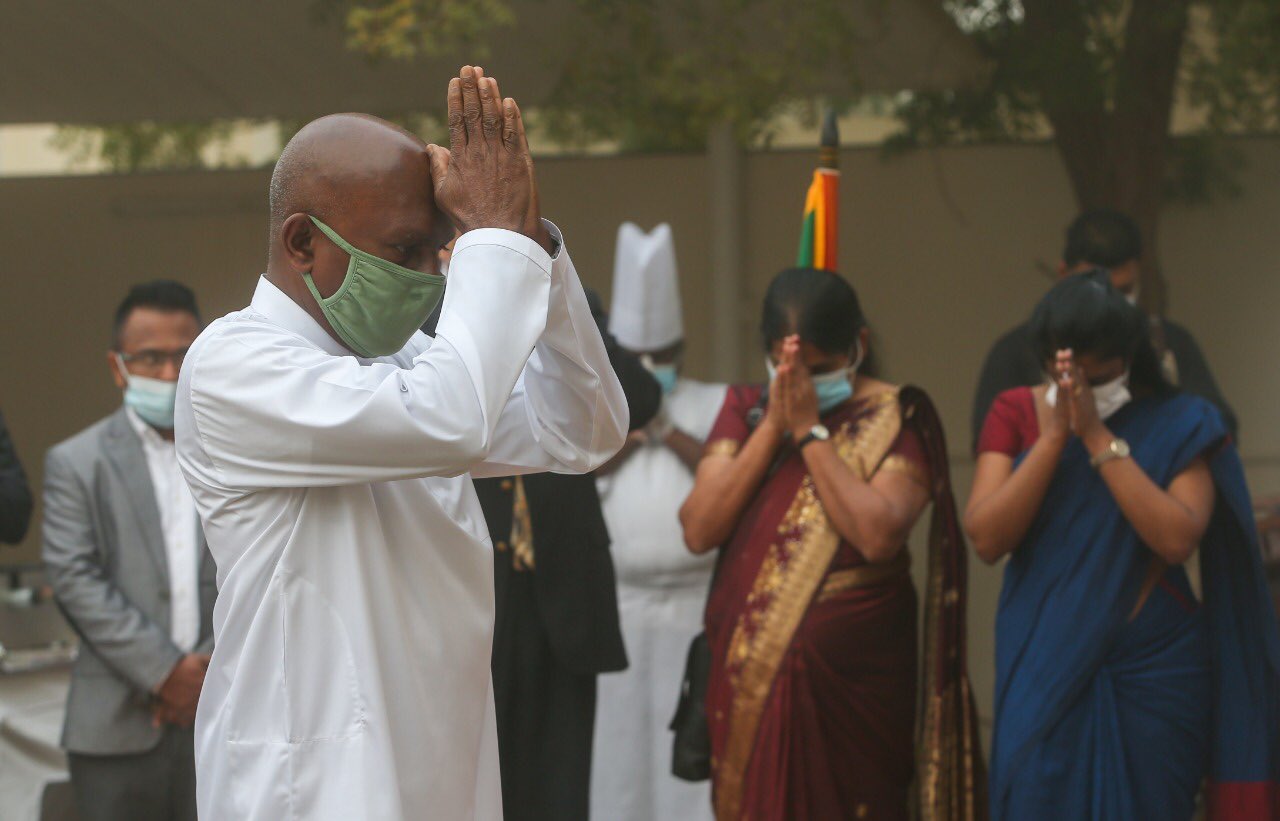 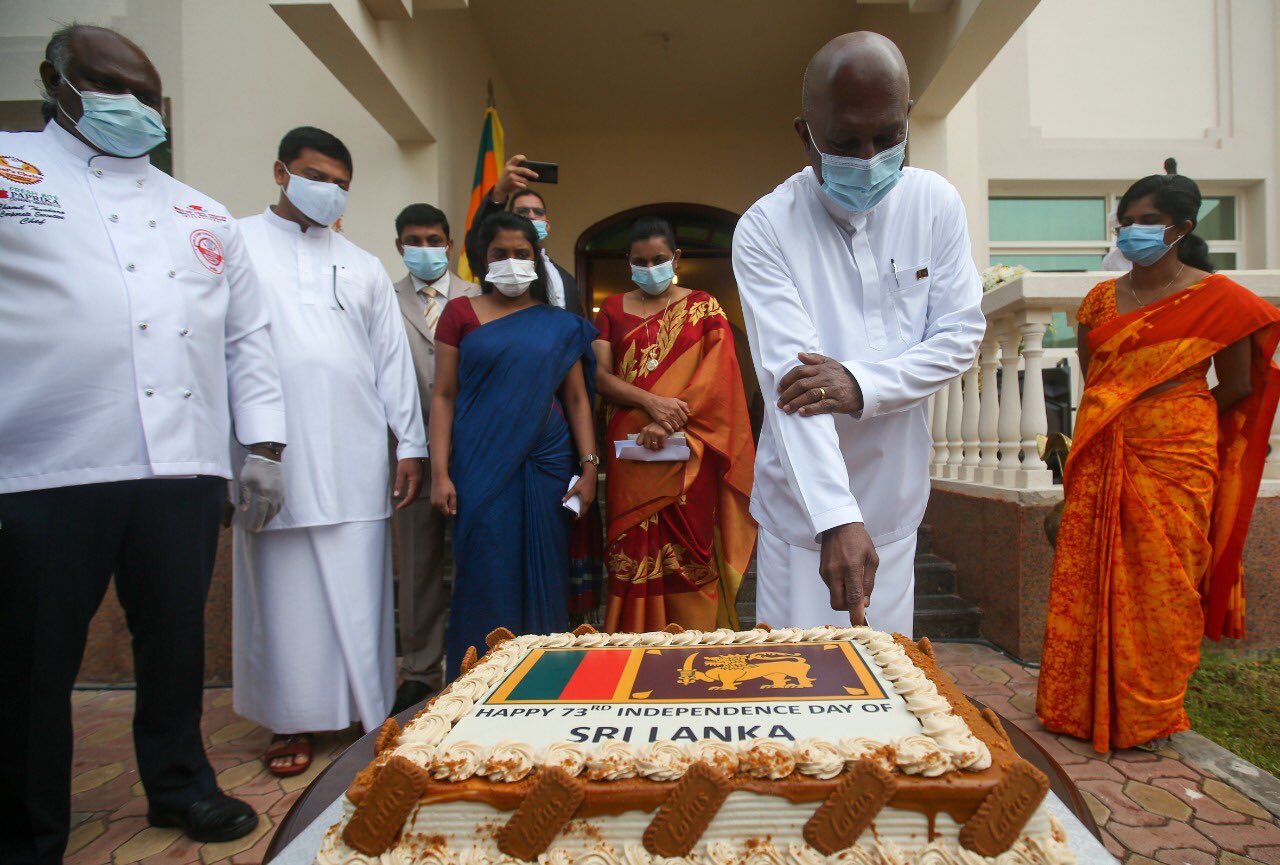 The Embassy of Sri Lanka in the United Arab Emirates celebrated the 73rd Anniversary of Independence on 04th February 2021 at the Official Residence of the Ambassador in Abu Dhabi with the limited participation of the Sri Lankan Community. The official ceremony was held in compliance with the health guidelines and safety protocols due to COVID 19 pandemic.
The celebrations commence with the hoisting of the National Flag by Mr. Dhammika Malraj de Silva, H.E the Ambassador of Sri Lanka to the United Arab Emirates followed by the singing of the National Anthem and Jayamangala Gatha.
Two minutes of silence was observed in remembrance of the national heroes who sacrificed their lives for the freedom of Sri Lanka. Multi-faith religious observances were also conducted.
Independence Day message of H.E. the President, Gotabhaya Rajapakse, Hon. Prime Minister, Mahinda Rajapakse and Hon. Dinesh Gunawardena, Minister of Foreign Relations of Sri Lanka were read out by the diplomatic staff of the Embassy.
Addressing the gathering, Ambassador, Mr. Malraj de Silva recalled the devotion of the forefathers of Sri Lanka for gaining independence 73 years ago and highlighted the importance of young generations of the country understanding the value of freedom as well as the respect for all ethnicities living as one nation Sri Lanka. He also elaborated how important it is to strive towards economic development for a developed and a prosperous nation.
A dinner reception was also served for around 80 distinguished invitees at Anantara Hotel Abu Dhabi which was attended by many Emirati Dignitaries and Ambassadors of Asian countries.
To honour Sri Lanka’s 73rd Independence Day, the world tallest skyscraper, Burj Khalifa, Dubai also displayed the national flag of Sri Lanka on 4th February 2021.